My NaNoWriMo stats graphs are always a bit erratic – almost every year, I have a massive word-cushion-making couple of days right at the start, then do sod all for a few days before another giant jump upwards.

I mean, last year I practically embroidered my word-cushion, it was so substantial. The same thing the year before.

For the first time since 2011, I am running behind with my NaNoWriMo. 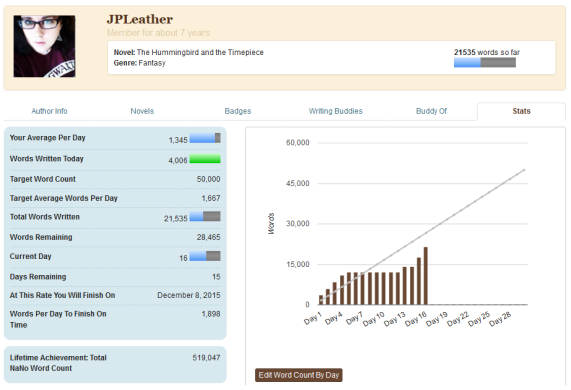 Just look at that for a crock of shite!

Nah, honestly, it’s not that bad. I’m miles behind everyone else, but I just did 4000 words right off the bat in two hours before my shift today, so I’m not that crazily worried. I’ve got a day off tomorrow with nothing planned but writing and dyeing my hair, so I think I can catch up.

I’ve not got any problems with the actual writing part any more, it’s just been finding the time to write, with all this house-moving and working business.

And I don’t half love my characters.

I was worried at first that I was turning Lucian Ruby (my main dude) into a creepy creep rather than a charmingly naive anachronism. But he’s got there, he’s worked himself out (and I’ve worked him out) and I think I can now get his parts written without making him sound like he spends his spare time hiding in bushes with a pair of binoculars. He’s not going to kidnap anybody and keep them in his cellar.

Ooh, maybe I should give him a cellar. That would be useful for other plot points about his past, actually… *blog post vanishes so I can scribble maniacally in my big folder of notes*

Anyway. Yes, I’ve got over all my third person blocks now. I’m getting into my characters’ heads just as well as if I was writing in my usual first person format. Their thoughts are still getting across. And for the first time in a long time, it feels like I’m telling an actual structured story, rather than just haphazardly following a fictional someone around and letting them ramble about their eventful life.

I’m twenty thousand words in now, and time travel wise, my characters haven’t gone that far yet. One of them went back to a Merseyside suburb in 1999 to prove a point, and now the pair of them have just landed in Hyde Park on the morning of Princess Diana’s funeral. Not the most inspiring of times to visit so far, but they’re getting there. In the next couple of chapters, the real adventures are going to be starting.

Tomorrow is going to be a very fun day of writing for me, let’s just say that.