Yes, yes, I know this is rather late… and Ted is actually turning nineteen months old in a couple of days. But still. I haven’t done an update on my tiny boy for quite some time, so here’s a bit about Teddy at eighteen months old. Just call it an excuse to do a happy parental brag about my clearly adorable child, and, of course, one hell of a photo-dump.

How on earth do I have a toddler?

It seems like in the space of about fifteen minutes Ted has gone from a chubby, cheerful crawler rolling round the floor – mobile, mischievous, but still definitely a baby – to an actual toddling person. He has his own tastes, his own opinions and absolutely no qualms about making them known – yes, he is a toddler.

I haven’t done a proper update on Teddy in a while and I don’t really know where to start. He’s just… my Ted.

Physically… just look at my beautiful boy. Everyone always says he’s the spit of his dad, but I can see a bit of me in him now he’s bigger.

I do hate all that ‘who does he look like?’ malarkey. Sure, he’s got a dimple in his chin, just like me. He’s got his dad’s jawline and the same shape around the eyes. But you know what? He looks like himself. Just my boy Ted. 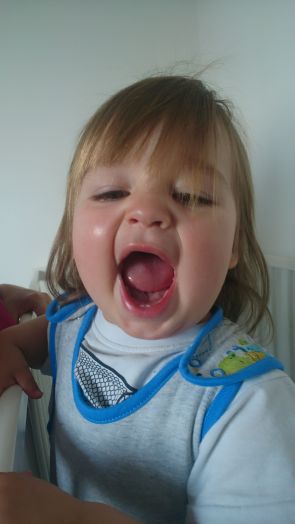 He can walk, run, and will try and climb anything that stays still (and a lot of things that don’t). His manual dexterity never fails to amaze me – he can colour, and attempts to draw. Most of the time nowadays, he uses a spoon or a fork to eat, and is very proud of himself for doing so – though, if he doesn’t like the look of something on his plate, he’ll delicately prise it off and offer it round the room, saying ‘mmm!’ to let you know how good it must be, so you’ll eat it instead. He definitely likes to share.

Less quaintly cute, he can get a DVD out of the box and into the PlayStation, and can go most of the way through the menu to get it playing. He’s utterly obsessed with trains, in particular Thomas the Tank Engine, so my house is overflowing with Thomas DVDs. Damn eBay.

Ted started nursery this month. I had some misgivings about this: he’s been a bit deprived of social contact with other children in recent months (yes, I still feel incredibly guilty about that) so I thought he’d be better with a childminder, with fewer kids around, so he wouldn’t get overwhelmed. Well, that all went out the window when the childminder we were going for let us down at the last minute and we had to get Ted into the closest nursery possible so I could start my new job.

It turned out to be a blessing in disguise. Ted still cries when we leave him – it’s only been a month, after all, and he only goes one or two days a week – but once we’ve left, he settles down pretty quickly and gets on with playing. He goes quite happily to all the nursery workers for cuddles, and is content to play alongside other toddlers. He prefers the older children to the babies; even though he’s supposed to be in the baby room, he spends most of his time toddling round the ‘big kids’ room and trying to join in with their activities. We got his first ‘school report’ a few days ago and it was a joy to read, just to see how well he’s improved in just a few weeks; his social skills and his speech in particular.

Teddy still doesn’t say much, when it comes to actual, discernible words. He still won’t say ‘mama’, and ‘dada’ comes very rarely. However, note that I say ‘won’t’ rather than ‘can’t’, because he can enunciate “WOW, A TRAIN” with perfect diction! He can also manage ‘digger’, sometimes ‘car’, and ‘a bear!’ when he sees one of his teddies. Oh, and ‘trees’ and ‘shoes’. He quite clearly understands far more than he says – you can give him simple tasks to do (“put this in the bin”, “wash your hands”), or start singing one of his favourite nursery rhymes and he’ll immediately start doing the actions.  Since starting classes at nursery, he even does a little Makaton signing now. All in all, he might be a little slower at speaking than a lot of his friends, but he’s doing absolutely fine – I just wish he’d say ‘mama’! 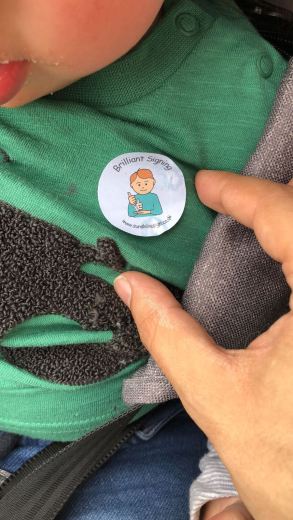 He might not have that many actual words yet, but Ted is certainly not shy when it comes to expressing his displeasure… yep, I’m pretty sure the terrible twos are just about starting to rear their head, six months early. Oh, we’ve not had the full-on tantrums yet, but he does a fabulously dramatic drop-to-his-knees-and-shriek routine when he’s not getting his own way! Luckily, he’s a relatively chilled child, so fingers crossed we won’t get it too badly.

Oh, speaking of potential tantrums and averting them… When we last visited Dreambakes, Ted was rather keen on sampling me and Kev’s flat whites. To the point that he was threatening to throw a bit of a paddy if he couldn’t. So, as I said to Kev, why not let him spoon a bit off the top? They had no sugar in, just coffee – the general prediction was that he’d find it too bitter, grimace, and not fuss over the coffee any more.

He took one taste and said “MMMM!”. And went back in for another spoonful.

We had to get him a coffee-free babyccino just to make him feel like he had a coffee too. I’ve got to remember to keep my endless mugs of half-drunk morning coffee on a high shelf, from now on, if I don’t want an exceedingly caffeinated one-year-old zooming about the place. 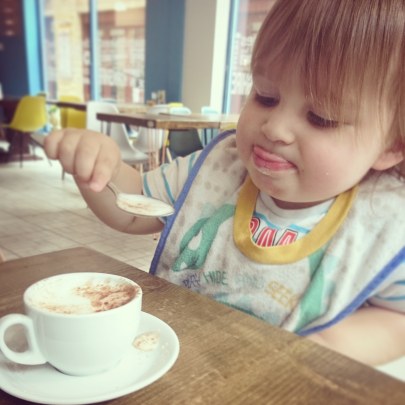 Teddy’s absolute favourite place in the world is York. As I said before, he’s obsessed with trains (all I hear at home is “Train. Train! TRAIN. TRAAAAIIN!” and all I hear at work is actual trains, this is my life now) and we go down to the National Railway Museum pretty often. Between that, and York Station itself (so many platforms!) Ted is in absolute heaven every time we go down there. He can’t decide what he loves more; standing on the viewing platform waving at trains, running between the trains in the Great Hall and poking each one in turn (informing me solemnly each time “a train!”) or playing with the train set in the toddler area. 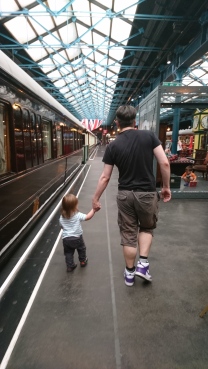 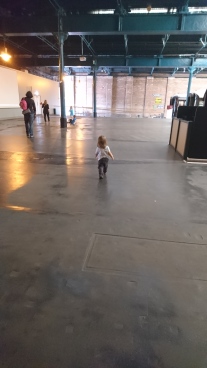 I’ve got this for years to come, haven’t I?

It may come as a surprise to some that both Kev and I still use various slings and buckle carriers to strap Ted to us on a regular basis: I’d say every day, he’s in a sling at least for a little bit. I already get people telling me he’s too big, pretending to worry about my back – yeah, yeah. If my back was hurting, I wouldn’t do it – believe me, he weighs two stone now, if my back even started to go, I’d know about it. 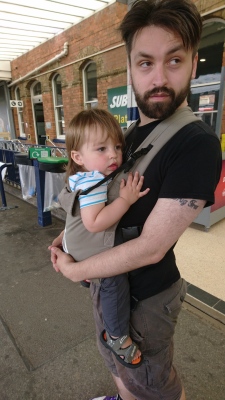 We mostly carry Ted for practical reasons: now he’s walking (and has been doing so confidently since he turned one), he doesn’t want to be in his pram all the time. When we go out, he wants to run off and explore, he wants to see. And rather than push a pushchair around after him all day long, it’s so much easier to stuff a carrier in my bag, and whip him onto my back when he gets tired. I’d like to think it’s strengthened our bond, too, and it’s one of the reasons why he’s such a friendly, loving little boy. Plus, you can’t help but melt when your child snuggles into your chest and goes to sleep. And, Ted being quite the independent little soul, the only way I get that nowadays is if he’s in a sling. It’s also lovely to be able to chat away to him, with the pair of us on the same level, especially now he’s starting to chat back.

When it comes to playing, Teddy is definitely his father’s son. He’s very methodical and likes things to have their proper place – he runs around the room like a whirlwind, tipping toys on the floor left right and centre, but then tidies them away neatly afterwards. He’s a great fan of putting things in order: whether he’s genuinely that methodical or just thinks everything can be a train if you try hard enough, I’m not sure, but there’s usually a neat line of cars somewhere in my living room. He also likes to build towers, preferably taller than himself, and is just starting to enjoy Duplo.

He also, um, really likes taking selfies. And can now take them himself. 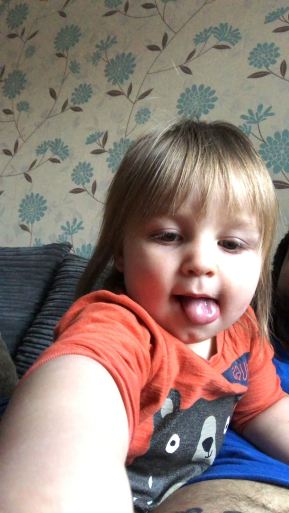 All in all, Teddy is an absolutely lovely little boy – I know, I’m bound to say that, I’m his mother, but it’s true. He’s an absolute delight, and the light of my life. I honestly can’t imagine what life would be like without him… well, that’s not true, there would be a lot fewer trains in it for a start, but it would also be a much darker place.

He’s a daft, loving little ratbag, and I wouldn’t change him for the world.